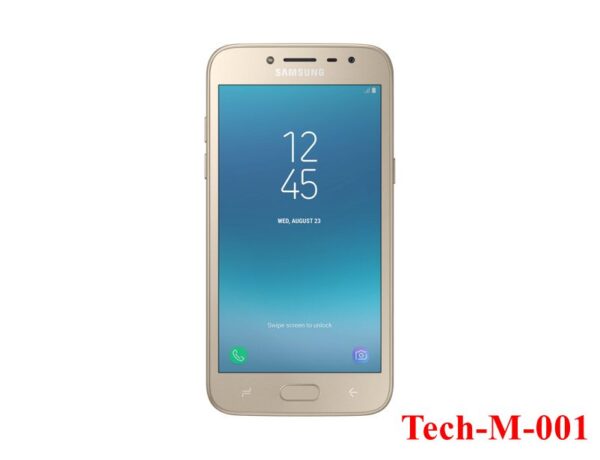 Samsung Galaxy J2 Pro The phone comes with a 5.00-inch touchscreen display with a resolution of 720 pixels by 1280 pixels. This phone is powered by 1.5GHz quad-core with 2GB of RAM. The phone packs 16GB of internal storage that can be expanded up to 128GB via a microSD card. As far as the cameras are concerned, the Samsung Galaxy J2 Pro packs an 8-megapixel primary camera on the rear and a 5-megapixel front shooter for selfies.

The Samsung Galaxy J2 Pro is a dual SIM (GSM and GSM) smartphone that accepts Micro-SIM and Micro-SIM. Connectivity options include Wi-Fi, GPS, Bluetooth, USB OTG, FM, 3G, and 4G. Sensors on the phone include a Proximity sensor and Accelerometer.

The J2 Pro sports a modest 8-megapixel camera at the back along with a single LED flash. Quickly double pressing the home button triggers the camera. The picture quality is decent enough to go on social media and messaging apps. Like every other Samsung smartphone, there are tons of camera modes to choose from. The phone also has a Pro mode that lets you take some more control of the sensor. There is no HDR mode. The video recording although limited to 720p is sufficiently clear and good in terms of output. The camera on the front is a 5-megapixel sensor and clicks some good selfies. There are a few modes and effects to help get that selfie. Beauty mode is just a click away and there is a screen flash option as well. There is 720p video recording capability and that’s about it.

Samsung Galaxy J2 Pro The phone comes with a 5.00-inch touchscreen display with a resolution of 720 pixels by 1280 pixels.

The J2 Pro is powered by a 1.5GHz Quad Core Spreadtrum Processor (SC8830).The processor is strictly ok for regular usages like calls, WhatsApp and a bit of social media.

The Samsung Galaxy J2 Pro is equipped with a 2600 mAh battery. Samsung has packed a 5V 1A charger in the box that gets the phone from 0-100 in a little under 2 hours.

There are no reviews yet.